It’s Not Too Late

Being late has always been an issue for me.  This day though, was different.  I was on time, but I was about to learn a powerful lesson about timing.

Jess and I met on Monday mornings at a convenient store called The Short Stop, located in a small town between the two of us. We were studying the book of John, spending an hour before she had to head to work in Bentonville.  Most Monday mornings, we met inside the little cafe where seating was located.  This particular Monday morning, she brought her dog with her, which required us to sit outside at the picnic tables to the west of the store.  It was a picturesque place surrounded by big trees with a little local school beside it and railroad tracks across the street.  Dixie, her dog, sat beside Jess as we enjoyed the beautiful fall weather and talked about some things in our study.

About halfway through, two unexpected arrivals came crashing onto the scene.  A biker, riding a rumbling motorcycle, pulled up beside us from the road.  At the same time, a pit bull came trotting up, seemingly out of nowhere.  Immediately, Dixie began barking and the pit bull advanced toward her with a menacing growl.  There was a flurry of “activity” complete with loud barking and growling as Jess drug Dixie quickly to the car and stuffed her inside.  The biker, seeing the commotion with the dogs, walked over and glanced at our stuff on the table.  He looked at Jess and me and asked if we were having a Bible study as the pit bull calmed down and began to wander off.

“We are!” I answered and asked if he would like to join us.  “We’re looking through the book of John,” I added.

The man standing before us looked to be around 60.  He seemed quite tall in his boots standing there by the picnic table. His face was weathered and tan, and his black hair was pulled back in a ponytail.  I asked his name and he informed me it was William.

William told us he had walked away from God.

There were a few minutes of silence.  Jess needed to leave, and this break in the conversation provided an opportunity for her to excuse herself and head off to work.  With Jess and Dixie gone, I sat there next to a man standing beside me who looked strangely sad.  William began talking about a time in his life when he had been very involved with ministry.  He had shared the gospel at a few motorcycle rallies and had great responses.  He organized a group of men and they began having church at the rallies.

For some reason, at this point, William launched into a story about an individual he had met at one of the rallies.  The man he’d met had a very vivid dream and hoped that William would be able to tell him what it meant.  The dream centered on the vision of a train roaring past, right in front of him.  The immensity and closeness of the train was frightening.  He had an intense feeling he should be on the train, yet he had no way of getting onboard.  There was an overwhelming sense that he was missing something very important.  Yet, the story had an interesting ending.  As he watched the train head away, he looked back and saw himself already standing on the platform of the caboose.

William admitted to me that he didn’t know much about dreams but for some reason that particular day, he felt like he knew the answer to the stranger’s question.  He shared with the man that the train was the gospel and that it represented the way to reach God.  And that although the man had felt it was too late to get on the train, it wasn’t.  They talked about Jesus and in fact, the man chose “to get on the train” that very day.  For numerous rallies after that encounter, the man with the dream would always come up to our biker and tell him how much their conversation had meant to him and the changes that had occurred in his life since then.

William paused and then added, “But I walked away from God and I don’t preach at rallies anymore.”

Somehow the question seemed to wake him up from somewhere deep in thought.  “I can’t,” he replied, letting the words just linger, hanging there in the gentle wind.  After another long pause he went on, “I’ve done something that won’t allow me to go back.”

He explained that his wife had developed cancer a few years ago and after months of watching her suffer, she had died.  An anger had welled up from deep inside and William said he had walked away from God.  He couldn’t forgive him.  William spent months alone lost in grief and sadness trying to find some kind of peace.

One day he heard a knock at his door.  Slowly he opened the door and standing there before him was a woman he knew well.  William and his wife had been good friends with her.  The woman stood before him with tears streaming down her face.  She said she was leaving her husband and needed somewhere to stay for a few days until she could figure out where to go next.  At this point in the story, I saw William struggle with what to say next.  Finally, he blurted out, “I shouldn’t have let her in, but I did.  And she stayed……. and I fell in love with her.”  She filed for divorce but several months later her husband came to the door.  He had come to tell her that he had been diagnosed with cancer and wanted her to come home and try to work it out.  William said it was agonizing for him, but he told her she should go home to her husband.  He packed her things and she left.

Another pause came in the story as though my biker friend was reliving the whole sad affair.  He looked tired and his face tense and stressed.  “I sat at home alone for a few days trying to understand what had happened and to make some kind of sense out of it.” After four days, once again a knock came at the door.  She had returned, saying that she didn’t love her husband, she loved William.  And she wanted to come back and live with him.  Sounding somewhat like a broken record, William told me, “I shouldn’t have let her in, but I did.”

He went on, “I knew it was wrong.  She was married and had so many things to work out. I didn’t need to complicate things.  This all just happened the night before last.  Yesterday morning I got up early, looked at her sleeping, and knew I needed to figure out some things.  So I jumped on my bike, and to be quite honest, I’ve been riding ever since.   For 24 hours I’ve been searching for answers.  I don’t know why I pulled in here, but I did.  And there you two were.  I want to get things right with God and I’m sorry that I walked away.  I’ve made so many bad choices since then that I don’t think I can go back.  Besides, if He did forgive me, it still wouldn’t be okay because I plan to go home and repeat the same mistake.  I don’t want to – I can’t – give up the woman I love even though being with her now isn’t the right thing.”

So there was William, just like so many of us are, standing at the crossroads of what we want and what we think is right.  Sometimes we just need someone to listen and talk through things with us.  That’s exactly what happened that day.  The two of us talked about how short life really is and what is ultimately important. That God forgives and not only forgives, but then enables us with the power of his Spirit to do what is right.  Often, doing the right thing requires a sacrifice.  William knew those things, he just needed to be reminded.  Maybe you need to be reminded of those things too. We all do.

As we finished talking, William held out his hand.  I wasn’t sure at first what he was doing.  Then it hit me.  I held out my hand and he took it and began to pray.  It was such a beautiful thing to hear a man who had been hurting and running away, turn around and head home toward his Father.

Just as William was closing his prayer, we could hear the sound of a train blowing it’s horn and racing down the tracks right across the street.  I smiled at my new friend.  In over 20 years of coming to the lake, I’d never seen a train on those tracks.  Right then was the perfect time.  As the train passed by, we both knew William was on it.  Because it’s not too late.

Now for pictures to the story “It’s Not Too Late” head to the Picture Page!

A few of the Pinterest Pins for “It’s Not Too Late.” 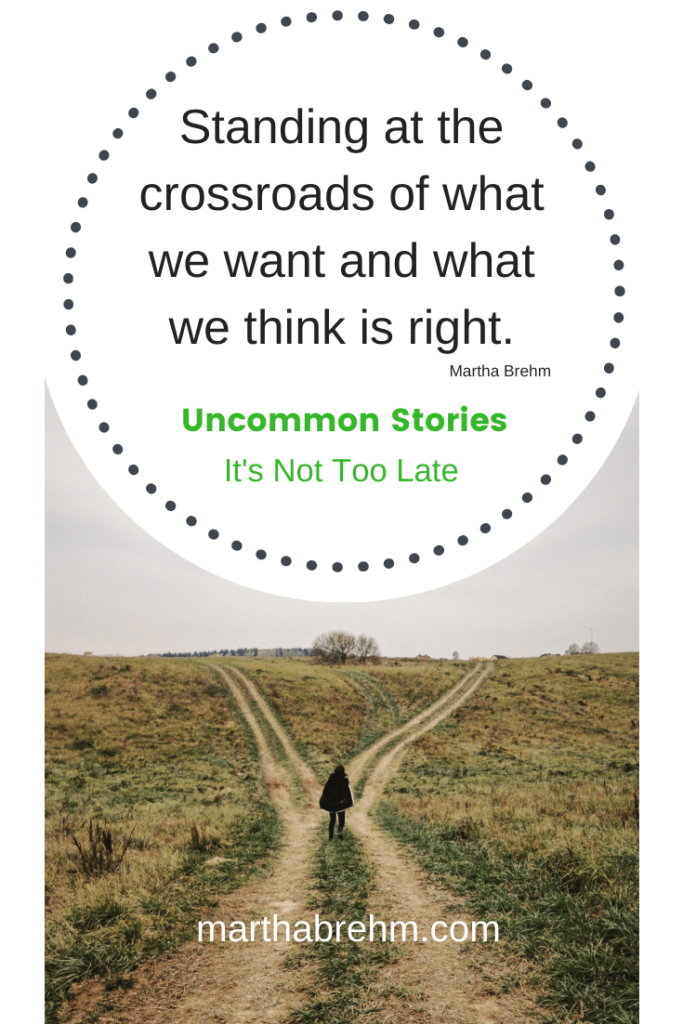 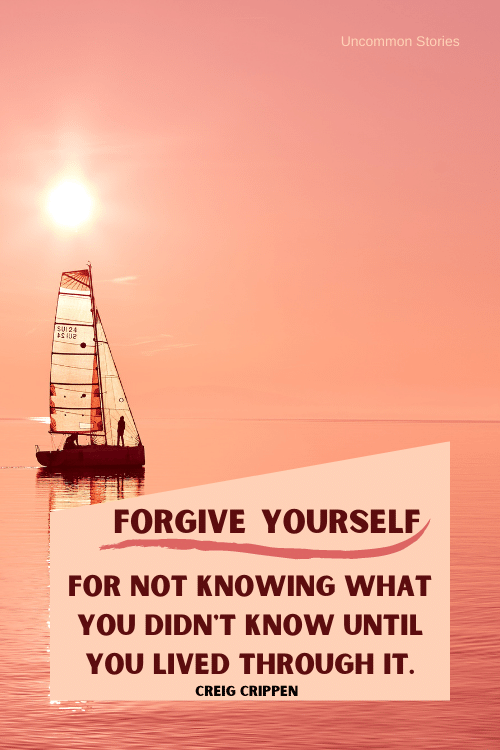 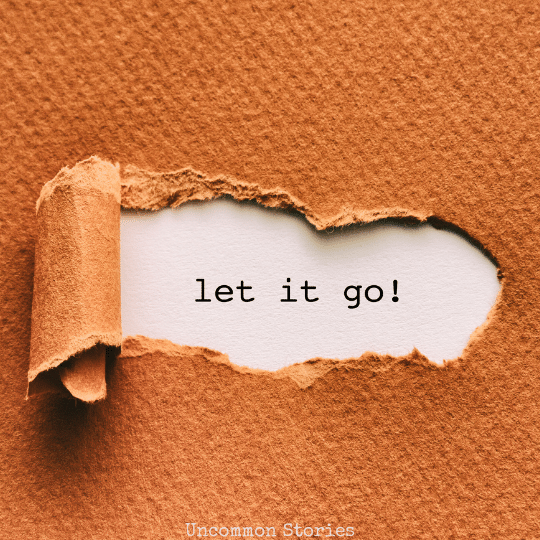 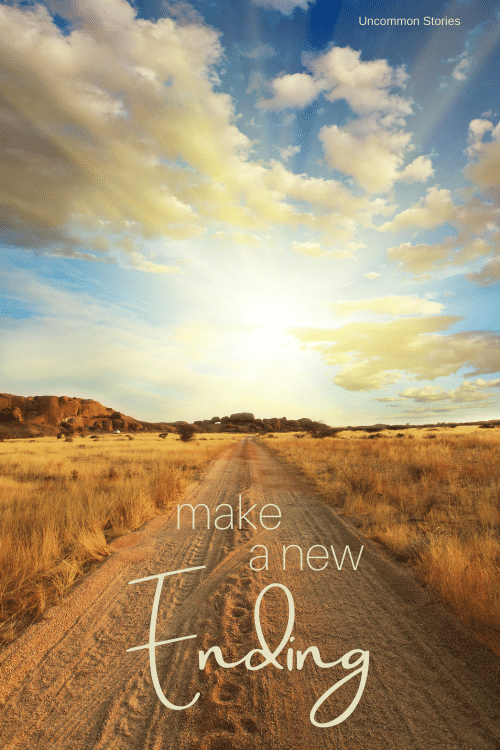 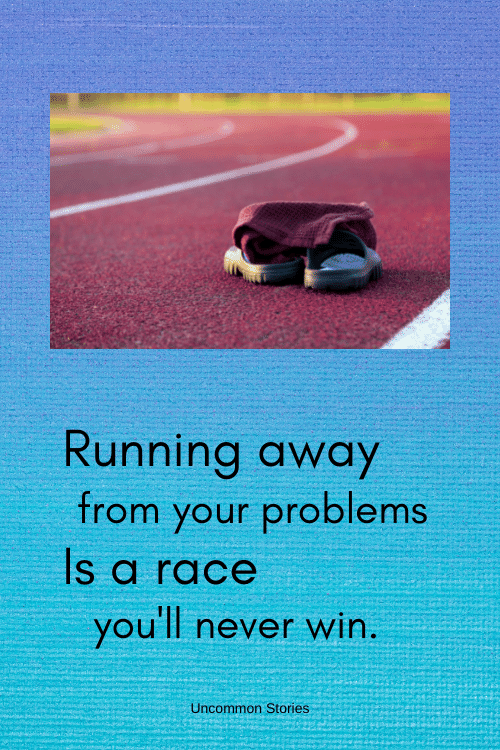 « The Promise of a Dance» Miracles Never Cease