This Uncommon Story is the first where the person I am writing about will most likely choose to remain anonymous.  But actually that flows into the story perfectly.  That’s because this story is about things that don’t come out in the open – things hidden away, never read, never spoken, never done.  Mainly this is a story about unopened letters.

The story begins with me in a restaurant having lunch with a friend.  As we visited and ate, she began to tell me about a man in whose home she was working.  Being in the health care profession, she never discussed his medical issues, or for that matter, even his name.  But she did mention that he was looking for meaning beyond the wealth and power we are all pushed toward in this culture.  Intrigued by what she was saying, I offered to come to the house and talk with him about trying to discover some answers.  My friend smiled and responded that was unlikely.  Nevertheless, she agreed she would mention it to him when she saw him next.

Weeks later, I was shocked when my friend relayed to me that her client was interested.  He gave his consent to letting me know his name and we set up a time to visit him at his home.  In the interval, I tossed around some different ways to seek answers to some of the complicated questions about life.  As a starter, looking at what other wise people had to say about the subject seemed like a good idea.  One of the world’s best-known commentators on life was Jesus, so I came up with various ways our threesome might take a look at what he had to say.

When the three of us met, introductions were made and we sat around a small kitchen table.  Thinking back, our small group consisted of pretty different people.  But the truth is, no matter who we are, we’re all looking for answers to a lot of the same questions.  I think finding the answers often comes down to a willingness to open up to other people as well as to ourselves.  We have to be willing to admit that we’re searching, to confess that we don’t have all the answers and not be afraid to look for those answers.  That takes revealing a part of ourselves that’s usually hidden, and that can be a very difficult thing…..

After tossing around different options, the three of us landed on reading the book of Matthew.  Some might wonder why we would even open up a Bible to look for answers.  After all, there are people who doubt it’s accuracy and relevance.  That in itself is a lengthy discussion and for the most part one I’ll leave for another day. I will however, have some links following the music video at the end of the story for those who are interested.  But there is no doubt, that Jesus was a real person and that he made such a profound impact on the world that we are still talking about him today.  That in itself is a pretty good reason to take a look at what he had to say about life.

Around the third time we met, a most unusual thing happened.  As I put together ideas for the visit, one particular thought kept coming to mind.  I kept thinking about a letter.  I’m not sure why, but the picture of a letter that was never read kept coming to mind.  I thought about what it would be like to write to someone you loved, I mean really loved, hoping that what you told them caused them to love you back.  How would you feel if later you found out, they had never even read the letter.

So many things left unsaid…….

And the world is a sadder place because of it.

Those thoughts echoed in my mind as I headed off to meet with my friends.  The warm breeze blew across my face in the car while the letter lingered on my mind.  When I arrived the three of us found our chairs at the round kitchen table where we usually sat.  Although the room was spacious, the seating arrangement was intimate.  As we began to open up our Bibles to the book of Matthew, I decided to use the idea of the letter that had been floating around in my head all afternoon.

“The letter we are opening from Matthew,” I explained, “was intended to tell us how much we are loved.”  Since Matthew (and Mark, Luke, John, Paul and the lot of them for that matter) couldn’t tell us face to face, they wrote letters to people they loved to tell them exactly that – that they were loved.  Not just by them, but by Jesus.  Ultimately, writing that message cost most of them their lives.  But the message in the letters was worth it – because love always is.

Although the men physically wrote those letters themselves, it was Jesus working in and through them as their fingers penned those words. The things they had heard him say so many times came rushing back and ideas formed and thoughts coalesced as they wrote.  God has a way of pulling things together.  It is, in the end, His letter and His story.  “Knowing that,” I said, “I’m sure God’s heart must break when his letter to us remains unopened.

As the words finished rolling off my tongue, I looked at the gentleman sitting with me at the table.  He had an odd sort of look on his face, appearing to be a combination of surprise and sadness with a hint of reflection.  Not quite knowing what to say, I asked, “What’s wrong?”

As his eyes met mine, he said, “I don’t think you know this, but I had a daughter who died.  One Valentine’s Day she placed a letter on my desk before she went out for the evening.  She never came home.  That letter remained on my desk for such a long time.  I couldn’t open it.”

He was right.  I hadn’t known.  If I had, I feel quite sure I would have never used the illustration of an unopened letter. There was someone, however, who did know.  The same God, working in and through people centuries ago writing the letters in your Bible, is still working in and through people today.  He still has the same message.  He loves you with a love that has no bounds.  He’ll do whatever it takes to get your attention.

That day He used the letter illustration to get the undivided attention of the gentleman at the table.  That man knew from personal experience what it was like to have an unopened letter from someone who loves you.  You may have one too.  I imagine somewhere close to you is a set of beautiful letters filled with the news of how much you are loved…the truth that you can be forgiven….and the hope that life has real meaning.  Don’t leave this world having never read those letters.

So stop for just a minute from the business of today and wake up from your slumber of assuming there will always be another tomorrow.  For all the things hidden away, never read, never spoken, never done – it’s time to bring them out into the open.  There is so much left unsaid in this world and so many things left undone.  So many people talking with so few people listening.  May each of us truly listen to the people we love before they’re gone.  And here’s to finding the courage to let our hearts speak the words we long to say.  Here’s to opening letters.

So many things left unsaid……

It’s time to come out of the darkness and light up the world.

“Then Jesus asked them, “Would anyone light a lamp and then put it under a basket or under a bed? Of course not! A lamp is placed on a stand, where its light will shine. For everything that is hidden will eventually be brought into the open, and every secret will be brought to light.”  Mark 4:21-22  NLT

“Your very lives are a letter that anyone can read by just looking at you. Christ himself wrote it – not with ink, but with God’s living Spirit; not chiseled into stone, but carved into human lives – and we publish it. We couldn’t be more sure of ourselves in this – that you, written by Christ himself for God, are our letter of recommendation. We wouldn’t think of writing this kind of letter about ourselves. Only God can write such a letter.”  2 Cor 3:3-5  Msg

“Don’t be intimidated. Eventually everything is going to be out in the open, and everyone will know how things really are. So don’t hesitate to go public now.” Matthew 10:26 Msg

“Nothing in all the world can be hidden from God. Everything is clear and lies open before him, and to him we must explain the way we have lived.  Hebrews 4:13  NCV

Links about the reliability and accuracy of the New Testament:

Josh McDowell:  “Testing the Historical Reliability of the New Testament”

Part One: Examining the Record begins 5 minutes into the video

For the pictures to Unopened Letters, head to the Picture Page! 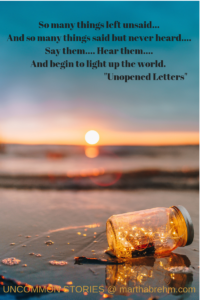 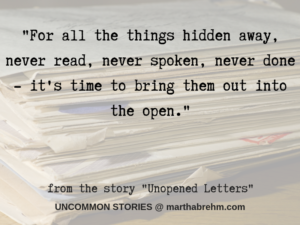