Some days are better than others.  This particular day was hectic and busy.  But as I passed by the school superintendent’s office, I couldn’t help but take a left and head in to say hi.  Misty, the superintendent’s secretary, was at her desk, which was covered with papers.  The phone was ringing, papers were flying, and she appeared to be hard at work.  Misty was one of my favorite people to visit.  It is unusual in this world to find someone who both takes the time and has the ability to make you feel welcome and wanted.  Misty is one of those people and I loved seeing her.  Almost every morning as people came in and out of the office, she typically had something encouraging to say with a smile on her face.  But on this specific morning, her usual smile wasn’t quite the same and she looked discouraged.  She appeared to be someone who needed not only a better tomorrow, but a better today.

Misty’s past several years had been exceedingly difficult.  She was a mom with two kids, in a marriage that was falling apart.  She was separated from her husband with no home and not much income.  As is so often true, the word complicated didn’t quite do the situation justice. Misty and her kids were staying temporarily at her friend, Janet’s house while looking for something permanent.  The problem was that she didn’t have her own home and didn’t see much hope of getting one anytime soon.  For some reason, on that particular day, the discouragement, disappointment, and darkness seemed to hang over her like a cloud.  As we all know so well, when we find ourselves in the middle of a difficult, lingering, ugly mess, all it takes is just one more thing to push us over the edge….some little thing at work that doesn’t go as planned, a phone call you didn’t want or expect, a hurtful word during a conversation, …. the list goes on.  Whatever had happened that day, my heart broke for my friend.

As Misty and I talked, I saw something out of the corner of my eye.  Behind and to the left of her desk was the door into the superintendent’s office, which was typically closed.  That morning, the door was ajar and I saw Dr. Rhea’s hand motioning for me to come into his office.  Dr. Rhea was the superintendent of the school as well as a wonderful friend.  He appeared tall and slender with glasses and whitish grey hair.  This was a man who beautifully managed the fine line of being in charge while still being warm and friendly.

When a break came in my conversation with Misty, I mentioned that I wanted to say hi to Dr. Rhea and moved toward his door.  As I walked into his office, I couldn’t help but notice the huge grin on his face.  In fact, even now it makes me laugh.  As my mom used to say, he looked like “the cat who ate the canary!”  Before I could say a word, he motioned for me to close the door and have a seat.  I didn’t think the grin could get much bigger, but it did, and his eyes twinkled, making him look a little like Santa.  Words started pouring out of his mouth with excitement as he described the “big surprise”.

Apparently, a couple who knew Misty’s situation, had just purchased a new house across the street from their old one.  Rather than move into their new home, they decided to give it to Misty rent free, unconditionally,  for as long as she needed it.  They gathered together a group of friends and remodeled it, preparing it just as if they were moving in themselves.  That group of friends had been spending long evenings working at the house getting the remodel complete.  They sacrificed time and money and did it all with unselfish love.  The plan and the work had been done in secret and Misty didn’t have a clue.  One of the members of the group had confided in Dr. Rhea about the secret and now the time was at hand to reveal the surprise.  The very next day, a meeting had been arranged between Misty and her friends at the remodeled house.   It was then and there that Misty would be given the good news that the house was her’s — rent-free to move into whenever she wanted.  That’s a pretty nice surprise and some pretty nice friends.  As Dr. Rhea finished telling me the details, the last thing he said was, “But don’t let Misty know, it’s a surprise.”

Walking back out of his office, I saw Misty still sitting there in her chair.  I knew how unhappy,  discouraged, and hopeless she was in her situation.  Misty had no idea that the house she so desperately needed today, truly would be her’s tomorrow.  I longed to tell her it was going to be ok, that she didn’t need to be sad, that tomorrow really would be better, and in fact, not just better, but extraordinary.  I wanted to say that she could trust me because I knew what the future held and that she just needed to hang on a little longer.  It was such an odd feeling – being part of her sadness and uncertainty in that moment, but also being aware of the joy and excitement that was soon to come.  It is a perspective we aren’t often able to have because we rarely know what tomorrow brings.  But there is One who knows quite well what that perspective is like.  He knows the end from the beginning.  He sees each one of our difficulties today and at the same time knows the resolutions in our tomorrows.   His heart is for each one of us to know the very things I wanted to tell Misty.  And to you, and each one of us, He says, do not lose heart, never give up.

When I get to the end of my life and look back, I’m sure there will be parts I will enjoy remembering so much more because I will know how it ends.  All the stress and anxiety will be gone and I will be able to see it with clarity knowing how all the pieces fit together. The difficult part of the here and now is trusting that there is a bigger picture that lends meaning and relevance to the trials we face.  And in the end, I trust the Master Planner.  It was Jesus himself who said, “In this world you will have trouble.”  But he also knows the ending of your story and adds, “but take heart, I have overcome the world.”  The following day was an overcoming day for Misty.  Her friends surprised her with a beautiful rent-free home and even today, she remembers that as one of the most unforgettable days of her life.  So for all of us in the midst of what seems like hopeless situations, just like Misty, your tomorrow may hold the answers to your problems today.  And Jesus promises to those who follow him, he is lovingly preparing a beautiful rent-free home for us as well.  So relax, because the best is yet to come.

“So we’re not giving up.  How could we!  Even though on the outside it often looks like things are falling apart on us, on the inside, where God is making new life, not a day goes by without his unfolding grace.”  2 Cor 4:16  MSG

“There are many rooms in my Father’s house.  I wouldn’t tell you this, unless it was true.  I am going there to prepare a place for each of you.  After I have done this, I will come back and take you with me.  Then we will be together.”  John 14:2-4  CEV

“For I know the plans I have for you,” declares the Lord, “plans to prosper you and not to harm you, plans to give you hope and a future.”  Jeremiah 29:11  NIV

“Weeping may last through the night, but joy comes with the morning.”  Psalms 30:5 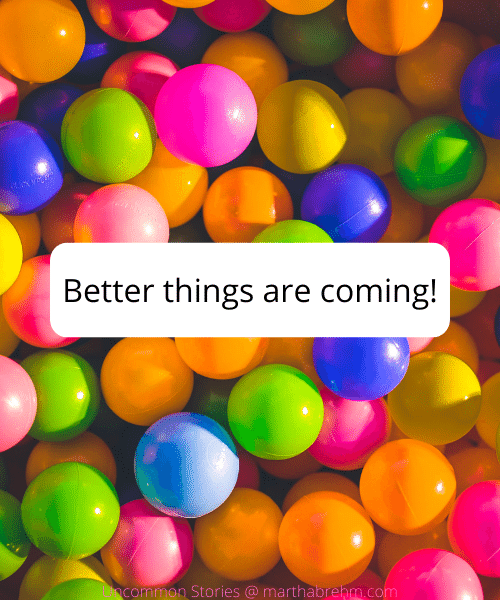 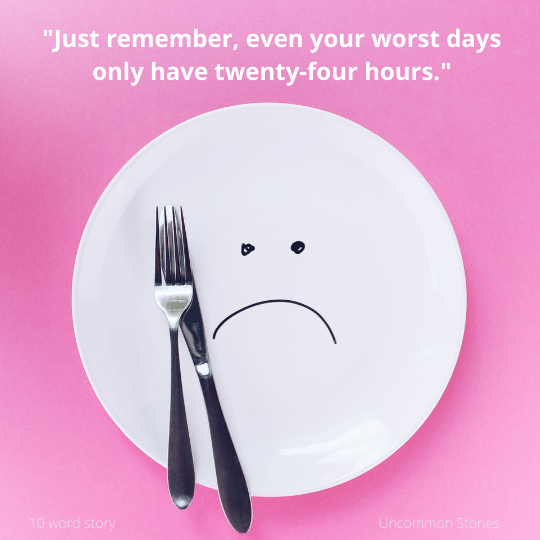 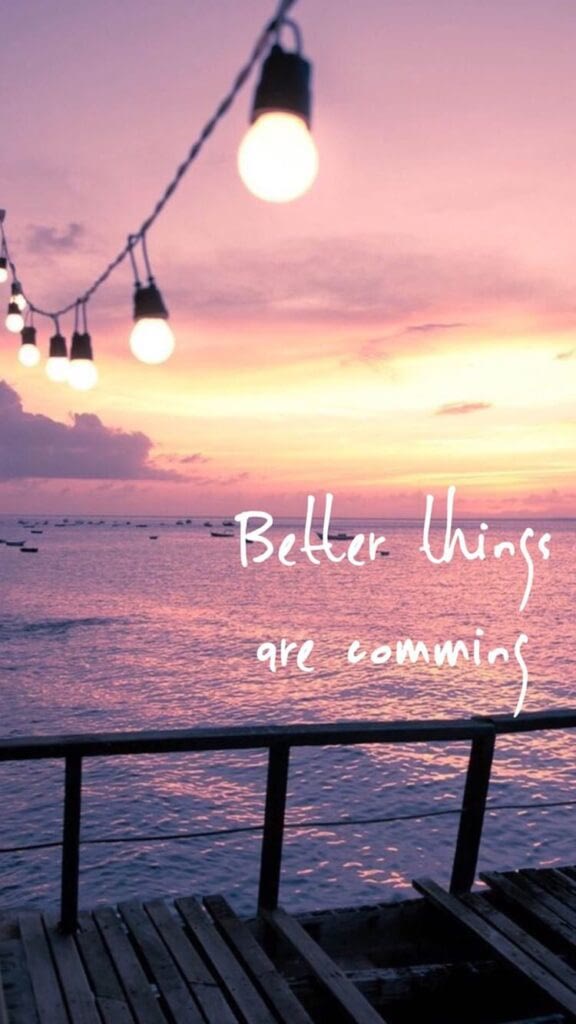 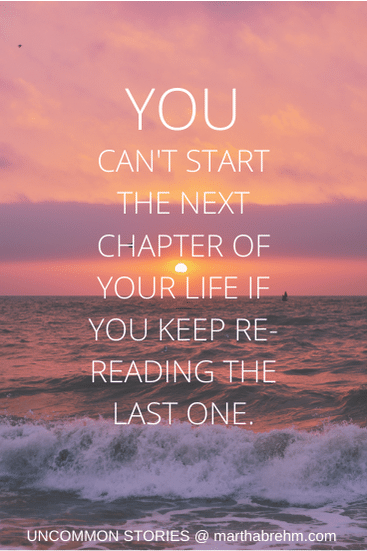 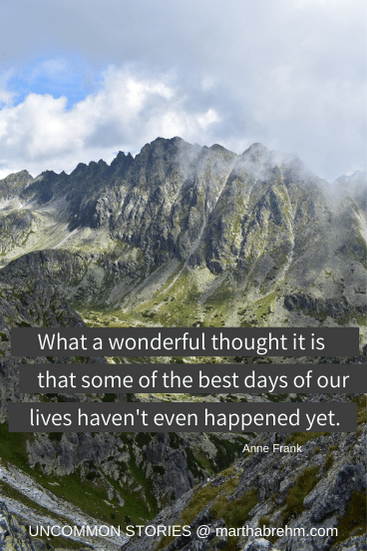 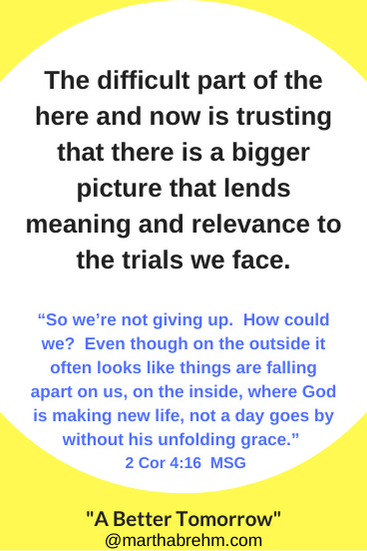 Don’t forget to watch the videos!

« Miracles Never Cease» Why Didn’t You Tell Me