One specific “any day” a few years ago, I went to a weekend conference called True Charity Initiative put on by James and Marsha Whitford. During the first session Friday evening,  I glanced over the dimly-lit room and thought I saw Rick.  His wife Theresa and I had been in a women’s group together several years earlier and were friends.  The man I saw that night wore a dark colored overcoat, but in the poor lighting it was difficult to tell whether or not it was Rick.  As I sat studying the man, the program began and I had to shift my attention over to the speaker who had stepped up to the podium and was beginning his talk.  Later that night, when I looked back across the audience, the man in the overcoat was gone.  Even after the conference ended, I searched the foyer outside but there was till no sign of the man in the overcoat I had seen earlier.

On following day, I managed to arrive early (which is a miracle in itself) for the Saturday morning sessions.  Coffee and snacks had been placed out in the foyer and groups of people were already clustering around them conversing.  I made my way to the food, filling a small plate and then grabbing some coffee.  As I stood there with food in hand, I heard someone say hello as they placed a hand on my shoulder.  Turning around, there stood before me the man in the overcoat from the previous night.

Close up and in good lighting, it was easy to tell it was Rick.  He asked if I had talked to Theresa recently.  I honestly admitted I had not.  Upon learning that, he smiled and said, “We have had a miracle.”

Rick just continued looking at me and repeated what he had said, but in a slightly different way.   This time he said, “God did a miracle.”  His facial expressions told me no further information was coming so we stood there in a moment of silence.

As I looked at the man in front of me, I began to notice there was something different.  At first I wasn’t sure, but then I looked into his eyes and I knew.  “You’re the miracle,” I said.  “It’s you, isn’t it?”

A huge smile came over his face as he replied, “It is.”  Then he added, “Theresa told me that the two of you had asked for a miracle.  I thought you should know, He answered.”

Now to understand why this was so extraordinary you’ll need a little background.  Several years prior, when Theresa and I were going to our group once a week, we had made the decision to stay after each meeting and pray for Rick.  In John 10:10, Jesus said his purpose in coming was to “give life – life in all its fullness.”  Theresa wanted  Rick to have the life that Jesus offered.  So, we spent four or five minutes every Thursday asking for exactly that.  But when our group ended eight months later, she didn’t see any changes in Rick.  Nothing at all.

One day Jesus’ disciples asked him to teach them how to pray.  Jesus did this by giving them a sample prayer and then followed it up by telling them a story.  Here’s how it goes in Luke 11:5-10 in the NIV – “Suppose you have a friend, and you go to him at midnight and say, ‘Friend, lend me three loaves of bread; a friend of mine on a journey has come to me, and I have no food to offer him.’ And suppose the one inside answers, ‘Don’t bother me. The door is already locked, and my children and I are in bed. I can’t get up and give you anything.’ I tell you, even though he will not get up and give you the bread because of friendship, yet because of your shameless audacity he will surely get up and give you as much as you need. So I say to you: Ask and it will be given to you; seek and you will find; knock and the door will be open to you. For everyone who asks receives; the one who seeks finds; and to the one who knocks, the door will be opened.”

So for Theresa and I, the fact that nothing seemed to be happening didn’t keep us from continuing to ask. We just kept asking. We knew that just because we didn’t see anything happening didn’t mean that we never would. And here I was, a few years later, coming face to face with exactly the thing for which we had prayed.  Life is a miracle and Rick had found it.

Now to be clear, not everything that we ask for, even persistently, is given to us.  In fact, one of my children use to ask when they were  little, why we couldn’t get a million dollars if we just kept asking.  Jesus’ brother James had a response for those type of questions.  He said in James 4:3, “Yet even when you do pray, your prayers are not answered, because you pray just for selfish reasons.” Perhaps that’s why Jesus said we needed to seek and keep on seeking.  Because if we are truly seeking God, and keep on seeking Him, then with time our hearts begin to look and think like his.  His desires and plans begin to become our desires and plans.  At this point, we begin to ask for the very things God wants to bring about, and that’s a place where miracles never cease.

And what is a miracle?  Miriam Webster’s definition is “an extraordinary event manifesting divine intervention in human affairs”.  Rick understood that sometimes we can be the miracle.  And what brings about miracles?  Perhaps for some of them, God uses the prayers of someone who doesn’t give up asking.

If you’re reading this and you’ve had a miracle in your life as a result of prayer, I’d love to hear it.  Just write it in the comments.  There is nothing more encouraging than to know that God is still in the business of doing extraordinary things.  So, share your miracle!  And if you’re needing a miracle, may this give you the hope you need to just keep asking, seeking and knocking.

You will seek me and find me, when you seek me with all your heart.  Jeremiah 29:13 NIV

Jesus replied, “There are some things that people cannot do, but God can do anything.”  Luke 18:27 CEV

In closing, a final shout out to True Charity Initiatives.  Thanks for your continued passion and hard work in addressing poverty.  Check out their website at truecharity.us

Don’t forget to watch the videos!

I love in this video that each of the children film a miracle they see in their own lives.  Take time to share your miracle too. 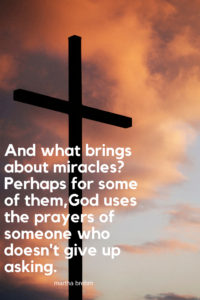 « It’s Not Too Late» A Better Tomorrow